Today I’m happy that I can finally announce version 1.0.0 of Elm Bootstrap. When I set out to develop Elm Bootstrap, my goal was to make an Elm package that makes it easy to build responsive and reliable web applications in Elm using Twitter Bootstrap. This version is the first step towards that goal. 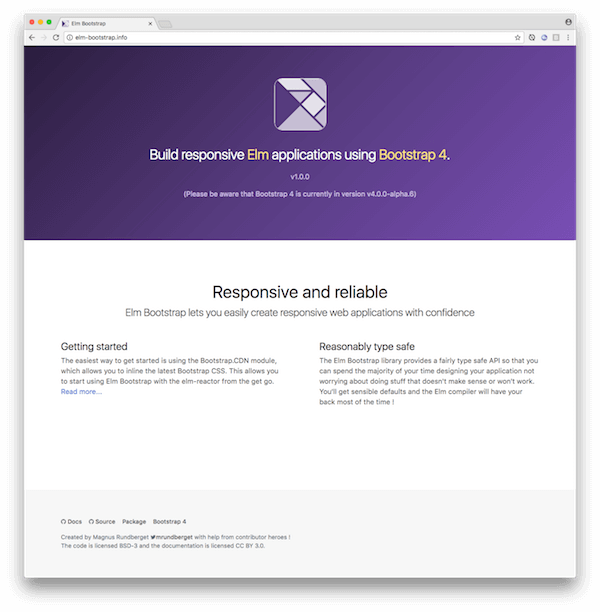 What is it then ?

Elm Bootstrap is a fairly comprehensive library package that wraps the upcoming Twitter Bootstrap 4 CSS framework. It provides a range of modules and functions to make it pleasant and reasonably typesafe to create a Bootstrap styled web application in Elm without giving up too much on flexibility. Most of Twitter Bootstrap is opt-in and the same applies to Elm Bootstrap. That means that you can pick and choose which parts you wish to use for your application.

These are the main modules that ship with version 1.0.0

The most comprehensive (and only) application using Elm Bootstrap at the time of writing this is the user documention site http://elm-bootstrap.info. You can find the source for the site application on github too. In time this will improve a lot. With the introduction of Ellie we now also have a great way to share interactive/editable examples of how to use Elm Bootstrap.

If you need help, there is a #elm-bootstrap channel on the Elm slack where you can ask for help. I’ll try to help when I can and hopefully others can help out there going forward too.

Twitter Bootstrap is one of the most popular CSS (with some JS) frameworks for building responsive, mobile first web sites. At the time of writing version 4 is in alpha-6 and apparantly the plan is to move into beta fairly soon. Version 4 is fully embracing flexbox, which will provide much better control and flexibility.

Creating a wrapper for Twitter Bootstrap probably doesn’t score very high on the hipster scale. However it’s no denying it’s still very popular and probably will be for some time to come. More importantly I’m using it in projects and have done so several times in the past, so I know it would be useful to me when I get a chance to work on an Elm project. Hopefully others will find Elm Bootstrap useful too.

What’s reasonable is obviously a matter of opinion. But since it’s an Elm package we’re talking about, the context is that it’s for use in a statically typed language that promotes reliability as a core characteristic. There is also no denying that Elm doesn’t have the most advanced type system out there. But in my humble opinion it’s one of the most approachble ones I’ve come across in terms of statically typed functional languages.

There’s no stopping you from just including the CSS from Bootstrap and start using it with the standard Elm Html functions today. Let’s face it, Twitter Bootstrap is mostly just a whole bunch of classes you apply to relevant elements you compose and voila. But applying a bunch of class strings is quite error prone, and it’s easy to nest elements incorrectly or apply incorrect classes to incorrect elements. Trying to alleviate that to some extent is what I’ve been trying to balance with necessary flexibility when defining the API for Elm Bootstrap.

I’m under no illusions that I’ve found the sweetspot that perfectly balances type safety, flexibility and usability. But given the constraints (the type system in Elm and my relatively short experience with statically typed functional languages), I’m reasonably happy with the API as a starting point. Real life use and feedback will surely help it develop in a direction where more and more people can agree that it really is reasonably type safe !

The development story - aka refactoring galore

For quite some time my main endevaours in Elm has been developing editor support for Elm in Light Table through my elm-light plugin. I’ve also been working blogging a bit on my journey learning Elm (and a little Haskell). But in November last year I decided I wanted to dive deeper into Elm, trying to make something substantial. Ideally something useful, but first and foremost something that would gain me experience in designing an API for use by others in Elm.

The Bootstrap wrapper idea has crossed my mind several times in the past, but never materialized. I did some research, but couldn’t find anything out there for Elm that was quite as ambitious as I had in mind.

I first started looking at the very impressive elm-mdl which brings awesome Google Material Design support to Elm. I got a ton of inspiration from this library. Next up I had a look through elm-sortable-table, trying to pick up on good advice and experience for tackling the interactive components in Twitter Bootstrap.

Hmm okay, let’s just start and see where it leads me.

So I started with a couple of modules using a record based api for everthing. That gave me an API that was pretty type safe and certainly explicit. But it looked horribly verbose where in many cases it didn’t provide enough value and even in some cases put way to many restrictions on what you could do. DOH. Back to the drawing board.

I know ! Let’s have 3 list arguments for everything; Options (exposed union types), attributes and children. So I refactored almost everything (silly I know), but it didn’t really feel right with all those lists and I also started to get concerned that users would find it confusing with the std Elm Html functions taking 2 lists. Time to think and refactor again. After that I started to run into cases where I wanted to compose stuff from several modules, well because stuff is related.

I’ll spare you all the details, but I can’t remember ever having refactored so much code so frequently that I have been during this process. Doing this in Elm has been an absolute pleasure. Truly fearless refactoring. The kind that is really hard to explain to other peope who haven’t experienced it. The Elm compiler and I have become the best of buddies during evenings and nights the past few months.

I can’t remember ever having refactored so much code so frequently that I have been during this process.

For most elements functions take two list arguments. The first argument is a list of options, the second is a list of child elements. You create options by calling functions defined in the relevant module.

Composition of more complex elements is done by calling pipeline friendly functions. This design gives a nice balance between type safety and flexibility.

Reaching out to the Elm Community

In the middle/end of January I reached a point where I on one hand was ready to just ship something. At the same time I was really unsure about what I had created so I reached out for comments on the elm-slack. Turns out that both Mike Onslow and Richard Feldman both have had overlapping ideas about creating a Bootstrap package for Elm. We quickly decided to see if we could cooperate in some fashion and decided to hook up on Google Hangout. Awesome ! We’ve had many really interesting discussions on slack especially related to API design. It’s been really great to have someone to talk to about these things (other than my analysis paralysis brain).

I could have been iterating forever trying to nail the best possible API and/or try to support every bit of Twitter Bootstrap, but I’ve decided it’s better to just get it out there and get feedback.

The API will certainly get breaking changes going forward, but I don’t see that as such a big negative given the semantic versioning guarantees and version diffing support provided by the Elm package manager.

I’m hoping folks find this interesting and useful enough to give it a try and give feedback on their experiences. In the mean time I’m going to work on improving the documentation, test support, API consistency and support for missing Twitter Bootstrap features.